What are solar panels made from and how do they generate electricity? 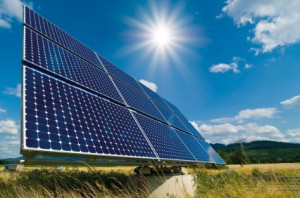 Solar panels are typically rectangular plates that look similar to dark glass. They are made from smaller solar “cells” that are wired together and assembled into a single panel. The solar cells work together to generate electricity in the solar panel. Although there are many different types of solar cells, most work in a similar manner. A positive layer and a negative layer of silicon are pressed together in the cell and as the sun hits one of the layers of silicon, it excites the free electrons which then flow back and forth to the other layer of silicon creating a natural electric current.

How much electricity can a solar power system generate?

It depends on how many solar panels for the home are wired together on your roof. Many commercial solar systems can produce as high as almost 1 Megawatt of energy at peak capacity (when the sun is shining). However, the typical residential solar system produces on average between 3-7 Kilowatts of electricity at peak capacity. For most homeowners, a typical solar power system is enough to completely power their home throughout the day. If the solar system generates excess electricity, it can either be stored in battery attached to the system or, in some areas, be sold back to the local electrical utility. During the night, when the solar panels are not generating electricity, your home will either (1) draw power from a battery that stores excess electricity from the the solar system or (2) draw power from the existing electrical grid. Fortunately, the typical home owner’s energy requirements are much less at night than during the day (when the solar system is producing electricity) and electric rates are usually much cheaper at night as well.

How popular is solar energy in the United States?

Solar energy in the United States still only accounts for a small amount of the overall energy usage, nevertheless, solar power is enjoying huge increases throughout the country. As consumers continue to learn about the tremendous benefits of solar power, federal, state and local governments have responded by implementing financial and tax incentives, such as solar rebates, to promote the adoption of of solar in homes and businesses alike. Thousands of homeowners as well as a large number of businesses have realized the economic benefits of solar power and have already taken advantage of these incentives. California solar has increased dramatically because of these incentives…over 250 megawatts of CA solar power was installed in 2010, leading the nation.

How much of my energy bill can solar power replace?

A typical homeowner may be able to save between 70-100% of their electricity bill when they invest in a solar power system. The exact amount of savings, however, depends on several factors:

How can solar power benefit me?

Home solar power can benefit you in several big ways. First, it can reduce or even eliminate your monthly electricity bill – imagine paying 70-100% less every month on electricity or even having the utility write you a check. Second, solar can increase the value of your home, sometimes even more than the cost of the system to you. As a result, solar can be a safe and stable financial investment.

The benefits of solar are not only financial though. Solar power reduces the amount of pollution released into our air and water, improving our quality of life. It also can make you more independent – power outages are less likely to affect you if you have your own solar system.